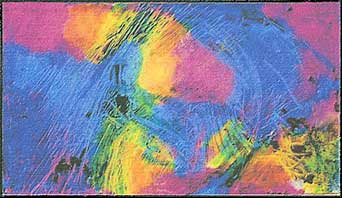 This has turned out to be a busy time for me so I have only created a few mini paintings. The one above is on the back of an old business card. I do these in the evening while I am listening to the TV. For this one I used Caran D’ Ache, which is a watersoluble artist’s crayon. I love the intensity of these crayons and the ability to scratch into the color.
The rest of my time has been filled with going to appointments; getting my house ready for the winter, packing and shipping online art orders and my grandson visiting. The appointments have been for my eyes. A cataract that I have had for years is now at the point that it can be removed. As much as I want better vision, the thought of surgery on my eye, or any surgery, is unnerving. Getting my house ready for winter has involved adding more insulation and my son and I installing a pair of folding doors in the master suite to isolate the sleeping area. It is so warm today it is hard to imagine winter coming.


My grandson’s visit was fun. He is in his last college semester and is a new age hippy! He reminds me so much of myself when I was his age. We went to an organic farmer’s market to buy some veggies. He is writing a paper on fermenting vegetables and is pickling everything in sight! The last time he was here, the art books I am working on inspired him. He brought along several abstract paintings he painted and wanted to make booklets out of them. I showed him how to stitch them together and he took it from there. I cannot tell you how much I enjoyed being with him.


My final duty today was voting. I hope you all have or will do so! 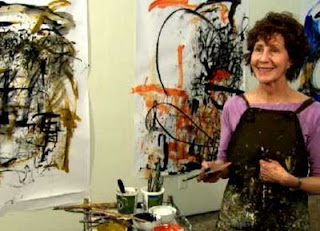 No, I am not teaching a class now and that lovely woman in the above picture is not me. However, earlier on June 4th -'Marks', I blogged about a book I bought by Steve Aimone, ‘Expressive Drawing’. As much as loved reading the book and looking at the wonderful drawings, at the time I was exploring painting on Yupo and I never got around to doing any of the exercises. I just received an email that Steve is offering a free online class. Here is a link to the class overview video and the info to join the free class. Looks like fun! Maybe I will set aside all of the other things on my schedule and try it. Possibly, you will too? 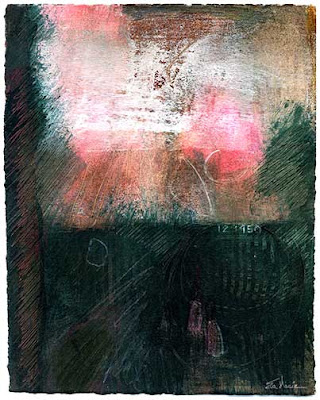 Eclipsed ©      8"x10"  primed rag paper
This is the second black gesso painting, which I titled Eclipsed. It was not my intention to do a series of black gesso paintings and this painting did not start with it. However, I was not happy with the direction it was going and decided to paint over it with the gesso, saving only the areas that interested me. I scratched back into the gesso to relieve the opaqueness of the paint, and then added a few more marks and numbers. It works for me now.


Eclipsed is a good description of my HP computer lately. I have been having trouble with some of the programs and the email accounts not working properly. I have several email accounts for various purposes and I use a web mail notifier. Unbeknown to me it started dropping the accounts so some of my emails went unread. Then one of my favorite programs, Evernote, stopped working properly. The only thing I could think of that may have caused this was downloading a freeware program, Open Office. It is a huge program, takes up a lot of space, and since I have Microsoft Office, I decided to remove it with YouUninstall. This program is very through; it clears out all the stuff. I hit the start button and went on to something else. When I returned, it noticed the uninstall program was still running like crazy! It was wiping out my computer! I have no idea what the program or I did wrong. Fortunately, I had an old image of my c drive and a recent restore point. However, it did not have all the updated programs. I spent most of the week reinstalling programs and taking new images of my drives, then verifying them. Now everything seems to be back to normal. My son says I have not been a good steward of my computer and it is a mess. He wants me to clean it out and start all over. Uggh! I will put that off as long as I can and save copies my important stuff on my portable drive. 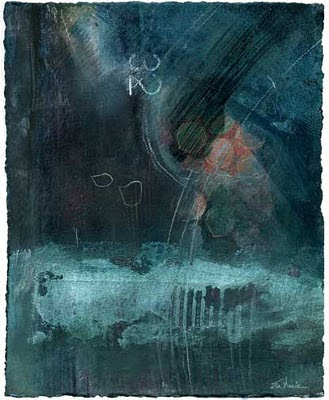 '32nd Matrix'    8" x !0" acrylic on primed rag paper
Several artists have raved about the quality and many applications for Utrecht's Black Gesso. I recently bought some and decided to use it as a substitute for black acrylic paint. However, it took over my painting. I fell in love with the creamy feel of it and its opaque matte coverage. I do not know what my fascination with black has been of late. For example, my portfolio cover and the black ink of the touch drawings, (see previous posts). To my knowledge, I am not depressed. In this painting, I think it is the mystery of the color that is intrigues me. Possibly the way it ties the elements together. The negative space blends with the positive and flattens the picture plane. In any case, it is a change of pace from the watercolor paintings on Yupo and since I have retired, I am all about change of pace.
Posted by Eva at 2:08 PM 14 comments: