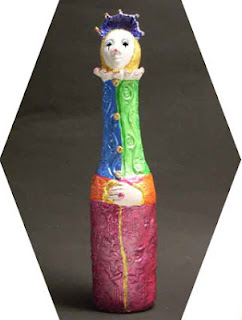 I have been having so much fun playing with air-dry clay and making art dolls. I feel like I am in my second childhood thanks to my wonderful new friends on Lorrie Jonas and Pamela Joy’s Joyful Art Ning site.

Last month I wanted to make an art doll using a beer bottle as my armature. I decided to make a jester like clown because the long neck of the bottle reminded me of some of the ‘Alice in Wonderland’ images. I used Super Dough air-dry clay designed for children to make the doll. I purchased it last year to make Christmas decorations, but I did not use it. I wish I had, as I would have never used it for this project. Although the dough is smooth and easy to work with, it takes a long time to dry and it never really becomes completely hard. I believe it is because of the wheat ingredient in it. It is actually dough. The other problem I had was all the cracks from shrinkage. My Friend Laura Thykeson  read on Dick Blick’s site that all air dry shrinks to some degree, especially when it is applied to a rigid armature. Because of the designs I embed in the clay I was able to disguise most of them with the addition of more clay when the doll was dry. I used metallic paint to enhance the festive appearance. All of this fantasy stuff is new to me, but it is a lot of fun to play like a little girl again.

Here are a few of the steps: 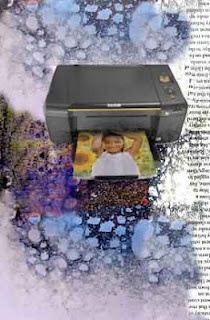 I have always been an Epson printer fan, but when my last one died, I was unable to replace it due to costs. The least expensive pigmented ink printer I could find was the Kodak printer. It is a poor replacement for the Epson, but since I am currently not generating that many prints, it is doable. I decided when my office Lexmark printer ink needed replacing, to buy another Kodak printer because it came with ink and I found one on sale. Unfortunately, the printer head eventually plugged up and I did not have the receipt or other proof of purchase to have it replaced. My son said he thought he could clean the print head. He sprayed a little Windex on the back of a folded paper towel and placed it in a Styrofoam tray. Holding the printer head in hand, he poured distilled water over it and some on the paper towel. Then he placed the printer head on the towel where it sat for a couple of days. I did not want to waste a lot of good ink to try the cleaned print head so I ordered some cheap generic ink online. Low and behold it worked! I have decided to use only the generic ink in my office printer, (which I can buy four for the price of one) and continue to use the pigmented ink in the studio. Do you know printer ink is the one most expensive liquid consumable we buy and the least expensive to produce? Check it out here
x
Posted by Eva at 10:02 AM 3 comments: