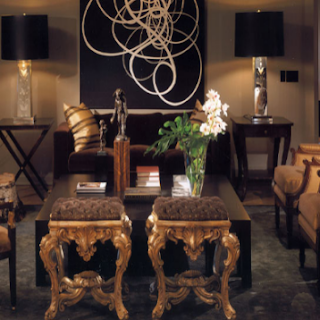 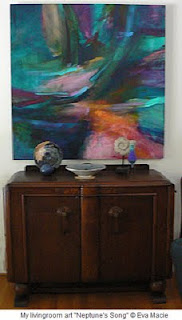 One of the comments on my last post about ‘Stacked Calligraphy’ was a question about displaying this type of art in a living room. I was a little surprised, as I believe one can display any type of art anywhere in their home. I personally have almost every type of art in every room in my home.
One of my abstract expressionist pieces, ‘Neptune’s Song’ (at the right) hangs in my living room. The colors and movement enliven the space and always command the attention of my visitors. 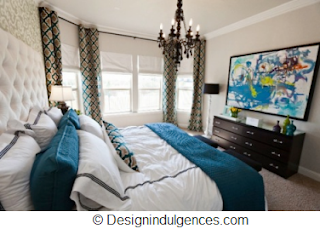 A quick search of the internet will yield many beautiful rooms that display abstract art. The two rooms that are not mine can be found at http://www.decorpad.com/photo.htm?photoId=1681 and http://designindulgences.com/2011/05/11/iwant-abstract-art/
Enjoy!
Posted by Eva at 2:46 PM 11 comments: 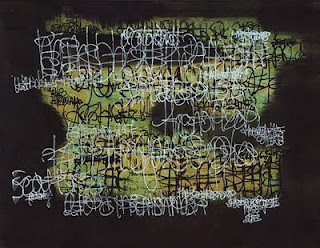 
In my search to find artists whose works, I believed, were inspired or reminiscent of Cy Twombly, I stumbled onto this super blog, Approachable-Art, by mixed-media and textile artist, Judi Hurwitt.  Judi’s art is not only reminiscent of Cy Twombly, but also of the early and possibly the original, American ‘calligraphic’ abstract expressionist artist, Jackson Pollock .
Judi has labeled her work as ‘stacked journaling’. The layers of paint she says are “graffiti-esque” in style. I call them eye candy for those of us who enjoy this style of art.


Another favorite artist in this genre is Alex Echo and this painting. 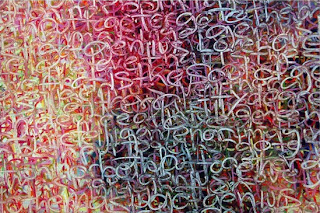 
It appears that Alex pulled his writing tool through the layers of paint, resulting in a wonderful woven tapestry effect. This is only a detail of the original and there is no reference to the complete size. However, judging from Alex’s other work I am guessing it is quite large. 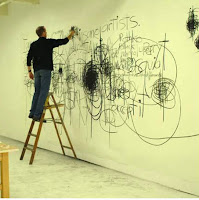 I am very aware that there are many who do not consider abstract expressionism and other contemporary art as “real” art. There is a lively discussion about this in the ‘Art Discussions’ group on Gary Reef’s Ning site, Lovingmixedmedia.com This is a great site to join if you enjoy 'outsider art' and would like to push the envelope and create outside the box. If you decide to join, I would appreciate you mentioning that I recommended it. I want Gary to know I appreciate all his hard work and free tutorials.Thanks.
One of the contributors to the Lovingmixedmedia ‘Art Discussions’ group posted this quote, which I think, gives food for thought:
"The aim of art is to represent not the outward appearance of things, but their inward significance." ~ Aristotle
Also a quote that I use on my web site, etc., is that we are;
“Making visual what, without the artist, might perhaps never have been seen”                                  ~ R.Bresson
Posted by Eva at 11:03 AM 18 comments:

Two great people passed this month.  A hero for all women, Betty Ford, brought awareness to the disease of breast cancer and addiction. She championed women’s rights. Standing and fighting for what she believed, even if it meant opposing the President of the United States, her husband, Gerald Ford. Some may feel she was a bit too candid, but she was my kind of woman, and her husband loved her. I wish I could have been her friend. 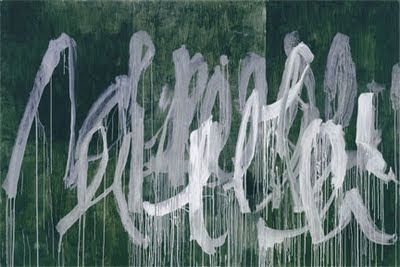 Twombly’s work has influenced many of today’s artists. His works are usually large-scale. Often they are calligraphic scribbles on backgrounds of mostly gray, tan, or off-white colors much like graffiti. According to Wikipedia , In the late 60’s Twombly made this work using an unusual technique: he sat on the shoulders of a friend, who shuttled back and forth along the length of the canvas, thus allowing the artist to create his fluid, continuous lines.
The layered or stacked drawing/ paintings are my favorite. The gestured marks remind me so much of the calligraphic ink writing of my Japanese sensei that I painted with when I was a young girl living in Japan.

Later I hope to write about some of today’s artists influenced by Twombly, but today I wanted to take the time to pay tribute to Cy Twombly and Betty Ford.